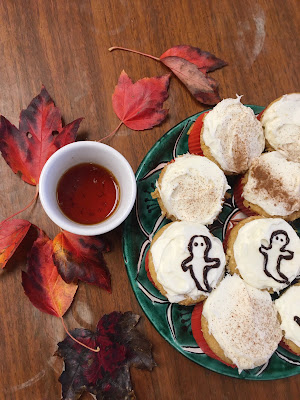 Halloween is almost here, which provides a fabulous excuse for being super extra about baked goods. I have def been getting carried away with my baking and other craft projects, and to be honest this recipe was mostly created so we all have an excuse to say “rooiBOOS” while making spooky ghost gestures at one another. Hence the cute little ghosts piped in chocolate on top. You’re welcome.
Teacup (our teenager) referred to these as “pumpkin spice lattes in cupcake form,” which I think just about sums it up. Let me know if you tried these, if you made any substitutions, and what you thought of the results!


(For cutie ghosts, use any store-bought piping gel or frosting. You can also use royal icing, or be lazy bums like us and just mix equal parts powdered sugar and cocoa powder with a touch of milk to create a simple decorating icing. Dusting with cinnamon is also super scrumptious!)
That’s it. That’s the whole recipe. Super simple, adorable and tasty. Enjoy!

How to read Indian and Sri Lankan tea grading Posted on July 22, 2021

When feelings have no flavor Posted on February 06, 2021

Behind the Blend: Moon Princess Posted on January 07, 2021

Stress Management in the Shittiest of Times Posted on November 09, 2020